Two options (2) are available to import and update placements from a .txt or .csv file:

1.  Using the Bulk Import Interface as outlined in the documentation below.

2.  Programmatically using Anthology Portfolio's Public REST API. Imports can be scheduled or triggered immediately. API keys are provisioned by the Portfolio team. Please contact [email protected] to request a key. (Note: for initial API setup it is recommended that test import files are configured using the interface option first. This will more easily identify any errors within the import file initially.

Combining the use of a template with bulk-importing Placements using a file can drastically improve your workflow and save you time.

It is recommended that you use the Placements Templates feature to create common planned assessments or surveys for Placements.

The bulk file importer workflows can then be used to import individual placement at scale. This will prevent the Administrator from having to access each Placement individually to enter specific information.

Importing Placements from a file differs from copying and pasting your data into the Placement Importer in the following ways:

The ability to maintain fields and data in a third-party tool (such as MS Excel) is more fully supported.

Placements are added in bulk to support the management of placements and co-curricular activities at scale. 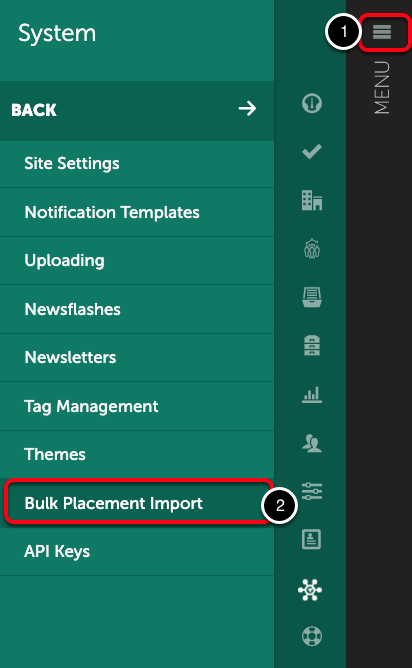 1. Click on the Main Menu icon and select the System menu item.

On the Automatic Import Configurations screen:

On the resulting New Configuration screen: 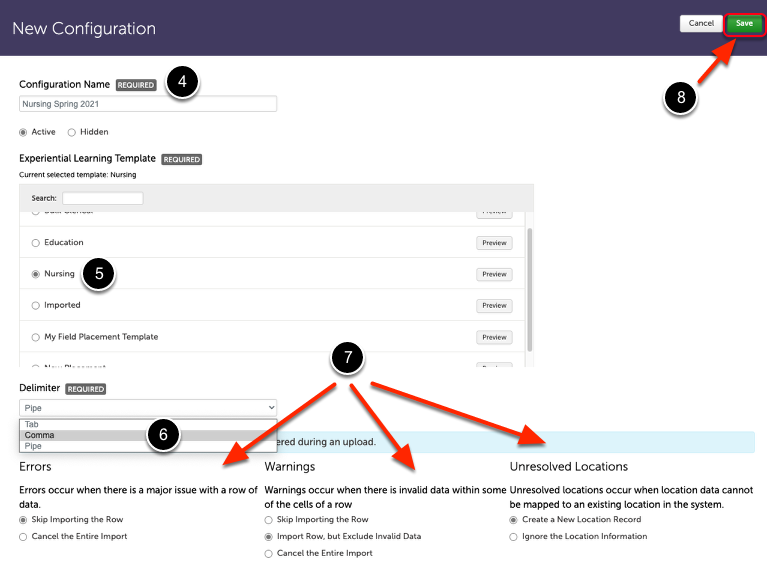 4. Enter an appropriate name for the new configuration.

5. Select a single placement template to import the placement data to.

6. Choose the delimiter that will be used in the import file.

7. Choose how the importer should handle file errors and data warnings. In most cases, files will be in tab or comma format.

On the Automatic Import Configurations screen:

9. Locate the configuration that you would like to add placement data to and click on the Manage button.

Required Fields: provides a reference file of all fields that require data in order for the placement to be ready for use by the learner.

Optional & Required Fields: provides a reference file of all fields that require data in order for the placement to be ready for use by the learner, as well as the custom and non-required fields related to the placement template that is associated with the configuration.

How to update previously created placements that do not have an external id:

To bulk update placements created without an external id, the system generated 'Placement ID' can be referenced by adding a column to the spreadsheet with 'record_id' in the header row. Upon import, placements with ID's that correlate to the numbers included in this column will be updated with any new information provided in the import file. 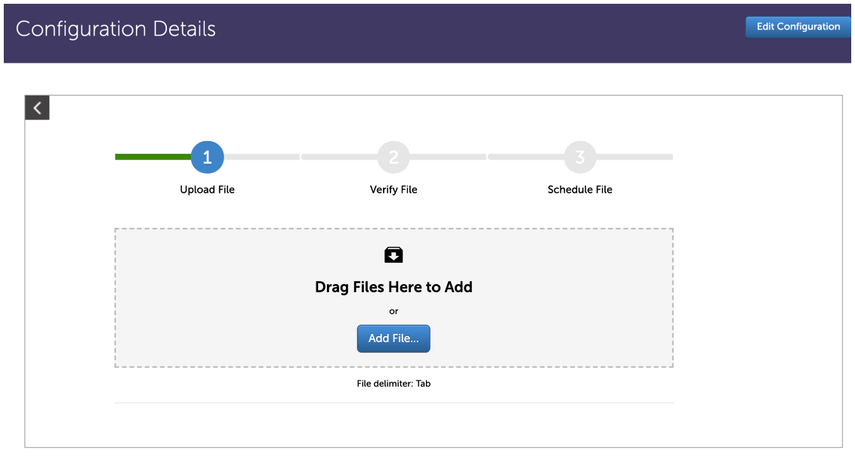 12. The file will automatically start scanning and will list any Errors or Warnings encountered once completed.

13. Click Next to finalize the upload settings of your data.

14. The data uploaded with the file may be imported immediately or can be scheduled for a future date.

Scheduling may be particularly beneficial for placements that are 'ready', but the desire is for them to not be visible to candidates yet. Scheduling large imports for a less busy time (i.e. overnight) can help ensure optimal site performance during peak usage times as well.